Who ate all the pies!?

On Saturday 10th September families and Gallic dancing enthusiasts gathered in Chrisp Street Market for the annual Chrisp Street Festival – this year celebrated in true country fair style with farm animals, and a whole host of traditional English fete games. I’m talking everything from splat the rat to hook a duck. All that was missing was a coconut shy.

Things took a little while to warm up, but by 12pm, when local musician John Parry kicked off the event with an acoustic guitar set, the square soon filled up as crowds moved in to watch.

A tough act to follow. But followed it was by ceilidh bank The Muckers. Despite a slightly awkward interlude when, I was told, the fiddler went AWOL in favour of a pint in a not-so-local pub, the band put on an energetic set, bringing a taste of the highlands to Chrisp Street. Passers-by, crossing the market on their way to various weekend engagements, were unapologetically roped into dancing by the caller who wouldn’t take no for an answer. Even Patch the Scarecrow took to the floor to show off his ‘do si dos’. 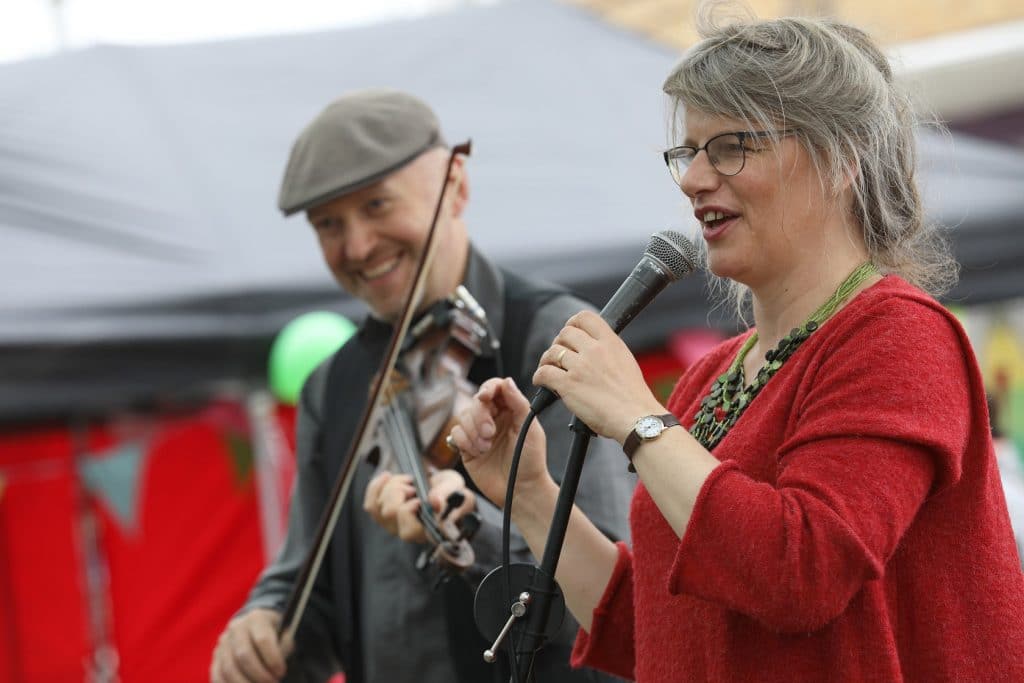 But if you thought the ceilidh dancing was popular, tug of war was full blown chaos. Volunteers young and old stepped forward to prove themselves in the ultimate test of strength and determination. The team closest to the stage came out victorious, which high fives and hugs all round. 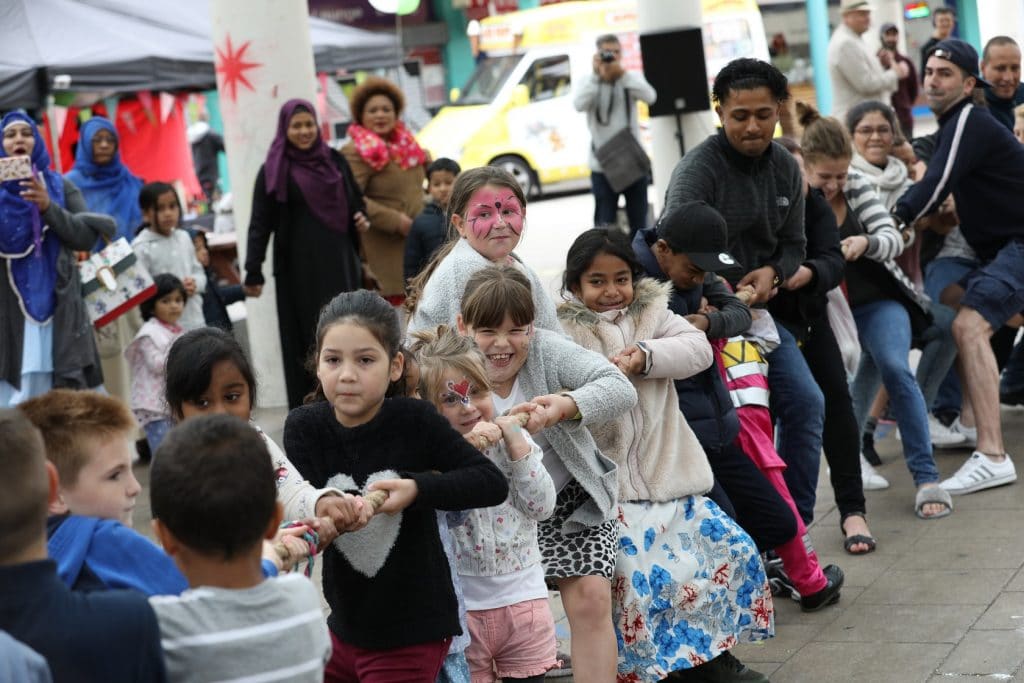 The tug of war in action, photograph by Rehan Jamil

More madness erupted at 2.30 from the highly prestigious pie eating competition. There was so much appetite to get involved that an extra table had to be found.

The challenge: to eat 4 traditional east end pies (kindly donated by Eastenders pie n mash café) in as short a time as possible.

The method: Freestyle! But most pie eaters agree that keeping the meat filling within the pie crust is helpful. 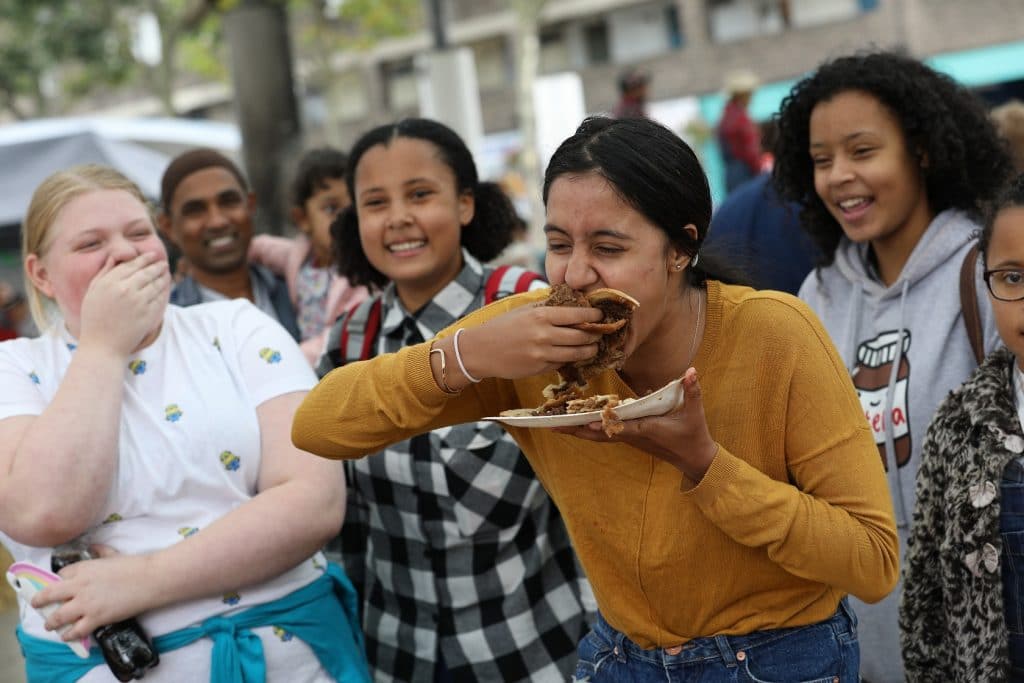 The result: It was a win for event team member, Paul Gold, whose innovative method of sandwiching 2 pies together with minimal chewing earnt him the sought after prize of dinner for two in one of Brick Lane’s finest curry houses. 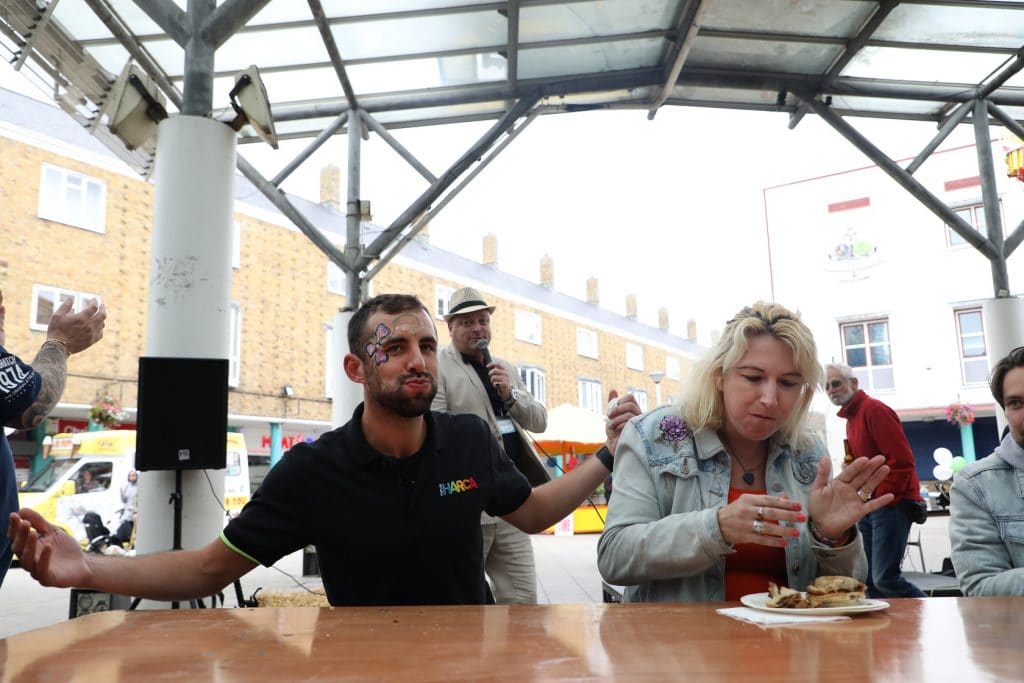 Outside of the main stage area, the petting farm was a star attraction. Local children gathered around the 3 pens to stroke the guinea pigs and say hello to Ben the alpaca, who seemed to prefer strutting round his pen than enjoying the attention. 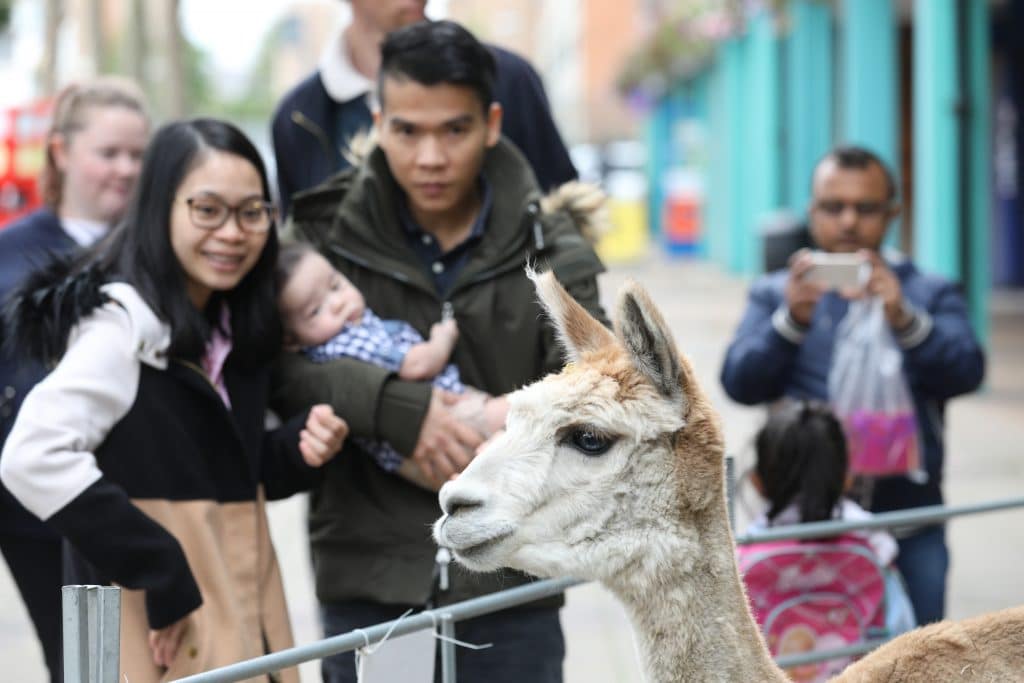 All in all, a great day out, with plenty of food, drink and markets to browse in between the main acts.