Tuning in to the Poplar Singers

Hannah, one of our PPLR bloggers, is also the founder of Poplar Singers – Poplar’s first Community Choir. We chatted to her about all things music.

How did the Poplar Singers come about?

I work for a local housing association who are really big on community regeneration and engagement, and they very kindly gave me an initial grant to get the choir going. I spoke with lots of local choirs and other community groups to get advice about setting up a group from scratch, and worked hard for a solid 3 months organising a choral leader, getting a (free!) rehearsal space, planning the budget, etc etc. After recruiting a super lovely lady called Penny to conduct us, we held a Give It a Go Session in February 2016. We had absolutely no idea how many people would rock up, but luckily it was a roaring success! We now have around 20 regulars.

What inspired you to set it up?

I come from a very musical family, and have sung in choirs all my life. But I’d never really had the idea, or the opportunity, to run one myself. The housing association I work for is hugely supportive and keen to get staff running projects centred on things they love. I was casually chatting to a fellow staff member at the pub about whether there were any local choirs in Poplar (as I was new to the area) to which she replied: “No, why don’t you start one?”, and I responded: “Well… why not!”. That Monday morning I found myself invited to a meeting about choral funding applications!

Who’s in the choir?

We have around 20 regulars, most of whom live in the area. It’s very diverse in terms of ability – some people have sung their whole lives, whereas others saw the flyer and rocked up having never sung a note before! It’s really amazing to see those members grow – from being slightly apprehensive at the beginning to singing in front of a large audience just weeks later. We’re a hugely supportive, tight-knit group and it’s a pleasure to be a part of. 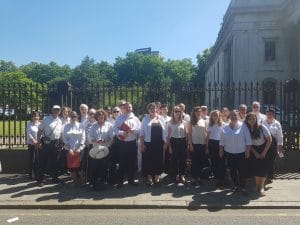 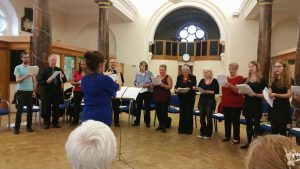 Hosting our own concert at St Matthias Church last Summer 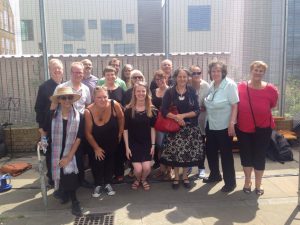 Where have you performed?

Our first ever performance was with Spitalfields Music as part of ‘Depart’ – a mass promenade performance at Tower Hamlets Cemetery Park that brought together circus acts, choirs and other visual arts. It was an amazing experience and kick-started our confidence to perform from the get-go.

Since then we’ve performed at lots of local events and festivals including the Chrisp Street Christmas Lights Switch On, Langdon Park Festival and the Tower Hamlets Cemetery Park Summer Fair. In June we were even invited to perform in front of MPs, Councillors and royals at the Upper North Street School memorial event – attended by the Queen!

We host an annual fundraising concert in the Summer which we actually did this week (check out the photos here) and we’ll be hosting a Christmas Sing-a-long at Poplar Union on 11th December – put the date in your diaries!

What’s next for the Poplar Singers?

We’ve just broken up for the Summer and are now recruiting for our next term. We begin again in September and would absolutely love to have some new people join us. It’s a super fun way to spend a Monday evening and a great way to meet other people living in Poplar – no experience needed!

The Poplar Singers meet on Monday evenings at 6:30-8:30pm, at The Cabin, 83 St Leonard’s Road, Poplar, E14 0QU.
Tune in to what they’re up to on Facebook, Twitter, or email them at poplarchoir@gmail.com.