The Bengali Shakespeare and All That Jazz

Take it away John.

Poplar Union arts and cultural centre may not be your cup of tea, but it’s definitely worth a visit.

On the advice of a friend, I visited Poplar Union to see what culture and arts they’re bringing to the area. I spoke to Betty one of the Poplar Union staff and she convinced me to drop by for a classical musical Indian event.  Saudha presents: Melodies from Tagore – Love & Loneliness. 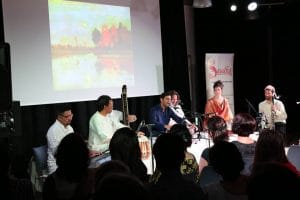 Rabindranath Tagore is an Indian poet and Nobel Prize winner in Literature from around the late 19th and early 20th centuries. As the music began they projected his words on a screen behind the musicians.

The music brought his words alive. Very moving! I felt transported to India, as if enjoying a hot Indian summer laying back listening to these beautiful melodies.

From Yousuf Ali Khan’s tabla beats to the howling sounds of Tirthankar Roy playing the esraj along with Alice Baron’s mix of the slow haunting violin and George Sleightholme’s deep saxophone, combined with the vocalist harmony of Eric Schleander these were fantastic layers of sound.

As a musician I’m quite surprised by the good acoustics at Poplar Union. The recital had a 20 minute break in which I grabbed a cup of chai tea from the café.    A really good evening and a very friendly crowd of people. 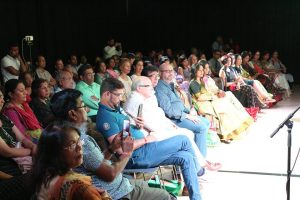 Sometimes you’ve got to try something new and different and I’m glad I did.

They’re so many different types of jazz, it can be a bit hit and miss with jazz shows sometimes.

I arrived at the show, A night of Jazz with Simon Roth & Guests at 6:45 pm on Friday, 11 August picked up a program at the door, only to find out the band weren’t on till a bit later.

So I grabbed myself a vegetarian corn burger with a nice salad and a cup of ginger & lemon tea. 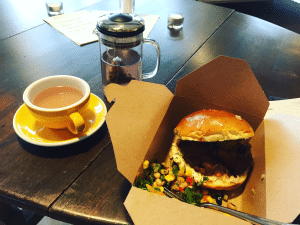 The event is taking place in the Poplar Union Library.

While waiting, I pick up a copy of H.G. Wells – Love and Mr. Lewisham and just chill out reading. 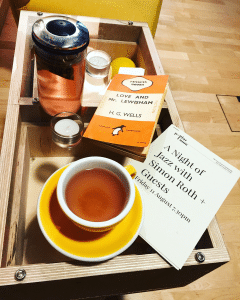 The band starts around 8pm with a Thelonious Monk tune and “Skylark” by Ella Fitzgerald.

These are four really good musicians. They could mix it. One minute fast, next minute smooth. They definitely had a great sound: Thumping double bass, smooth and steady beats, layered with a vibraphone and saxophone.

It’s really great to have some quality musician’s play in Poplar instead of having to traipse all the way up to the West End.

They entertained us with “Everything I love” by Bill Evans and “Sweet George Brown” by Louis Armstrong before finishing the first set with a Charlie Parker number. 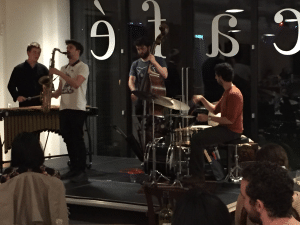 The band had a 20 minutes intermission and began the second half with “Bye Bye blackbird”, I believe it’s by Ella Fitzgerald.

A fantastic night,the musicians enjoyed themselves and closed the show with a 15 minute improv session. 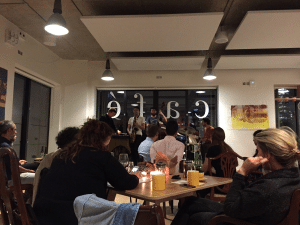