Paddling Boarding: A (Limehouse) Cut above the rest

Let’s be honest, the Limehouse Cut doesn’t have the best reputation. It’s known as being a bit manky – a river that’s more often green than blue is never a good start. So I’ve never really considered going for a walk along it, or doing anything near it. But when I saw an advert that said you could PADDLE along it, I have to say I was intrigued…

Now, I’m not the most sporty of people. I play badminton with mates once a week and dip into the odd exercise class (always followed by wine which I guess defeats the whole point…), and rarely do anything too adventurous that would require getting wet, tired or dirty (let’s say I’m more of a glamper than a camper). But the thought of paddling along the Limehouse Cut was hilarious to me, and with a bit of encouragement from a friend we thought, what the hell, let’s give it a go! (For the lols, of course).

I have to say, the experience was eye-opening for two reasons. Firstly, paddle-boarding is pretty easy. You start paddling on your knees and when you feel confident you stand up. The thought was slightly terrifying, but it was actually pretty comfortable and the session leaders were really helpful at giving quick advice if you found yourself accidentally going backwards, or paddling into wall (yeah, that happened). The instructors gave a quick lesson and made sure everyone felt confident before heading to the water. We did a quick route up to the bridge and back – it was perfect for beginners. And most importantly – no-one fell in! 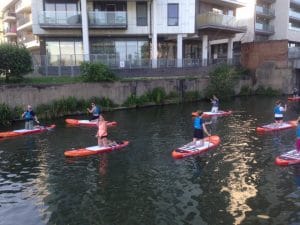 On our knees, before we made it to standing up…

Secondly, the Cut isn’t actually that dirty. Ok, so my oar did wade through the odd Coke can and crisp packet, but on the whole it was pretty pleasant. There are regular litter picks there now which have dramatically improved the cleanliness of the water.

The experience was such a laugh, and for only a tenner for the hour I would absolutely recommend it. They also do longer sunset tours which include a pub stop. You can book your tickets for both paddle boarding and litter picking from the Poplar Union website here.