Meet the hepcat behind Swing East

A week before Swing East returns to take over Chrisp Street Market on 16th July, we caught up with its founder Nelson Piperides to talk Swing, records and this year’s festival…

Swing East will be celebrating its fourth anniversary – how did it begin and what was the idea behind it?

I work locally and the idea for Swing East came about at a Christmas party when I was talking to a colleague about music. I wondered if we could take Chrisp Street Market back to the early 1950’s when it was built as a part of the Festival of Britain. The first event that we put on went down really well with the locals and also brought a lot of people in from outside the area, so we decided to make it a yearly event and it has grown each year.

There have been so many favourite moments at Swing East; some amazing dancers, and the bands that we have put on have been incredible, but I think my favourite performance was from Sugar Ray’s lucky Strikes who closed the show last year – Jumpin’ Rhythm and Blues of the highest quality. Sugar Ray Ford (Pat Reyford) has played at all three of the previous Swing East events with a different band each time and this year he will be fronting one of my all- time favourite bands: ‘The Big Six’.  He grew up in this area and used to hang out at Chrisp Street Market as a child. 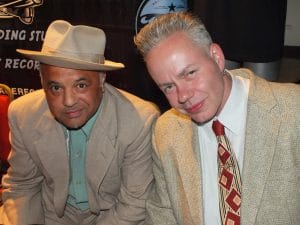 You’re a Swing and Rock and Roll enthusiast – how did you get in to the scene?

I really got into music from the 1950’s when I was about ten or eleven – as a family we all went to a working men’s club in my home town Loughborough and once a month the Loughborough Rock n Roll Society put on a dance. I was blown away by the music, the clothing and the dancing – during my teenage years the whole scene became my life and I started to discover the music that created Rock n Roll…I started to listen to and collect a lot of Rhythm and Blues, Swing and Boogie Records.

We hear you have a pretty large record collection, how many do you have? Do you have a favourite?

I honestly don’t know how many records I have; I could probably retire if I sold them all! I have boxes all over my home…but they are in some kind of order. The majority of my collection is early to mid- fifties Rhythm and Blues, the rest is a mixture of Rock n Roll, Western Swing, Jazz, Rock-a-billy, Hillbilly, Swing and Boogie Woogie. I also have a pretty good vintage world music collection.

Over the past few years I have been collecting a lot of 10” shellac 78’s – I have a separate 1950’s Regentone record player for these as they need a different Stylus to get the best sound. It helps that one of my best friends is one of the top vintage record dealers in the UK. We grew up together and got into music at the same time. 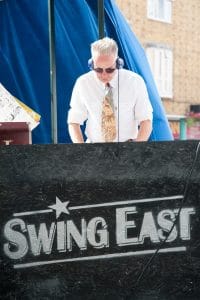 Nelson on the decks at Swing East

Tell us about this year’s Swing East – who’s coming, is there anything new we should watch out for and what are you most excited about?

This year’s Swing East should be by far the best yet! We have the best ever line up and have had to bring in a bigger stage to cope with it, as the first band on are a fourteen piece dance band – ‘The Palace Avenue Dance Orchestra’ will be Swinging us right back to the 1930’s, all of their recent London Shows have been sold out!

To follow we have Jackson Sloan and The Rhythm Tones who have been filling dancefloors around the world with their fantastic live show, playing a red hot mix of Rhythm and Blues and Western Swing.

Playing last will be one of my all- time favourite bands, ‘The Big Six’ who will be rockin’ up a storm! On the decks will be myself and our special guest from Birmingham, DJ Tomcat’s Jump Night. I caught him playing to a huge overfilled dance floor at the two-week-long Summer Jamboree festival in Italy last year.

We also have Shag Pile back by popular demand to teach some hot new moves, and they’ve created a new dance routine especially for Swing East – they’ll perform it as the Shag Pilots.

And of course lots of other stuff too! We have more Traders, vintage cars on display, a great selection of food and drink and this year we’ve added a Fun Fair for the kids.