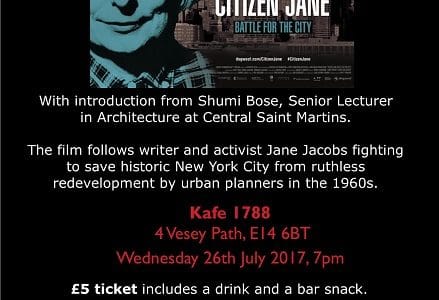 If you like a good film, good night out, or both, the Poplar Film Club’s upcoming screening of Citizen Jane is sure to please.

We spoke to Samantha Manton of the Victoria and Albert Lansbury Micro Museum who is co-presenting this screening.  She tells us why we should come out and watch a film about one woman who 50 years ago fought for the people of New York City and why it’s still very relevant today!

Why should people come and watch Citizen Jane?

Citizen Jane is a powerful and thought-provoking documentary that explores the consequences of reconfiguring a city without any real understanding of its neighbourhoods and the way it works at the level of everyday, lived experience. Jane Jacobs’ impassioned and deeply human stance in opposition to this ignorance is extremely inspiring, proving that change can happen once citizens engage. I hope others will feel the same. Additionally, ruthless city planner Robert Moses makes a great movie villain and the dramatization of the ‘showdown’ between him and Jacobs over the future of New York City makes for a highly entertaining watch.

Why did you choose to screen Citizen Jane?

Currently at the Lansbury Micro Museum we are exploring with local residents aspects of the neighbourhood they feel are important to hold onto in the face of oncoming change; what should be preserved for future generations, and how might these aspects be supported so they continue to benefit people that live and work in the area. The film follows activist and writer Jane Jacobs, who took time to recognise and analyse the nuanced ways in which neighbourhoods work and evolve.   She fought to protect longstanding communities of New York City from destructive urban renewal projects. Choosing to screen this film seemed an obvious choice.

Why is this film relevant today especially for this community?

It’s quite amazing how relevant the film is despite it following events which happened more than 50 years ago, and in a different part of the world. The threats of top-down, sharp-edged, monolithic regeneration schemes are still being faced by communities the world over today. This is highly palpable throughout the East End right now. Whilst rallying against the dehumanised, ‘quick-fix’ architectural programme of city planner Robert Moses, Jacobs emphasised that first and foremost cities are heterogeneous communities of people rather than simply a collection of buildings. Recognition of this by those in power today feels as much-needed now as it did back then to Jacobs and her coalition.