As those of you tuned into your cockney rhyming slang should know Box of Toys is another way of saying that you’re planning to make a lot of noise. The monthly Box of Toys open mic nights at Kafe 1788 have been doing just that for nearly three years now, and this week’s event was the most varied and interesting yet.

Starting off – as has become tradition – with a few covers from bassist Del and the night’s ringmaster Dave, Kafe 1788 soon became host to singer songwriters and spoken word poets. 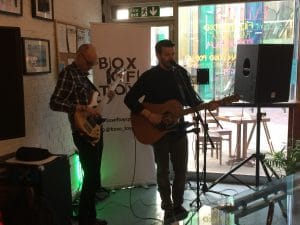 Grime artist Ed Weezy dropped by for a few tracks too. Expect him to follow in the footsteps of grime legends and Poplar locals Dizzee Rascal and Wiley.

Ukulele supergroup the Funky Pluckers also put their own four-stringed twist on a few classics, including an instrumental cover of the Special’s hit Ghost Town. They even provided some spooky ghost vocals to go along with it.

The night closed off with a performance from Box of Toys favourite John Parry, playing a set of East London-inspired original songs. My personal favourite was ‘Nice Shoes’; John explained this was about the time he couldn’t think of anything to say to a girl he met on a train, so began to compliment her shoes. Hey, whatever works.

The night was an all-round success, and we’re looking forward to the next event on the 3rd of May, headlined by local legend George Trevor White. Make sure to follow Box of Toys on Twitter and Facebook for updates on all future open mics, and head on down to Kafe 1788 at Chrisp Street for information on their other events, alongside some of the best coffee around. 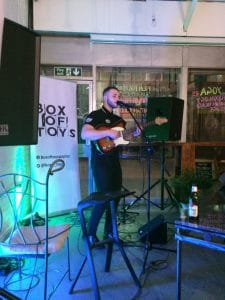 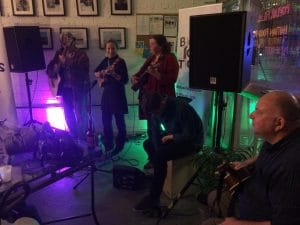