In the midst of the beautiful flowers and multiplying sheds of Poplar Pavilion, I spoke to Hema about her journey to becoming a beekeeper through a training course in Brownfield Community Garden…

Why did you decide to start training as a beekeeper?

A number of reasons. In 2015, I visited a bee farm in Montenegro, and did a tour of the hives and some honey tasting. The beekeeper there told us stories about how the bears would come down from the mountain and steal the honey sometimes, and how frustrating it was for him. It was really fascinating.

I’m also bit of a health freak. Honey has a lot of anti-inflammatory properties and I like to use it for face masks. Also, if you suffer from hay fever then local honey is supposed to be really good for you because its builds up a tolerance against pollen.

What have you done on the course?

First of all we learnt the theory – colony management, the different roles of bees and diseases in hives. Bees can be a real problem in urban areas so you have to know what you’re doing and recognise when they might swarm. If they were to swarm in our hives, for example, they could come into Chrisp Street Market and be really dangerous if they felt threatened.

Next we got to build the hives… from flat packs! In brownfield there were two European hives – just plastic hives – which keep the bees warm in the winter and cold in the summer. But these two European hives hadn’t been touched for years; it was really overgrown. The aim of the project was to bring the hives back to life by moving the bees into the more commonly used national hives.

How did you move the bees?

You just need to move the queen and then the workers will follow. She’s a little hard to spot but is usually found hiding in a corner underneath the worker bees because she doesn’t like sunlight. She also looks different to the other bees because she’s a bit longer. You’ve just got to have a good eye and scan through the frame until you find her, and then you mark her with a bright yellow pen that lasts for 3 years.

There’s two ways of doing it – some beekeepers just hold her and do it. Or there’s like a little prison (or cage!) that you just push down over her to mark her. 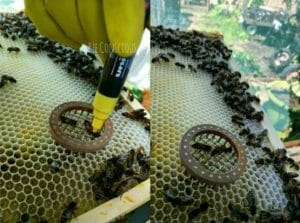 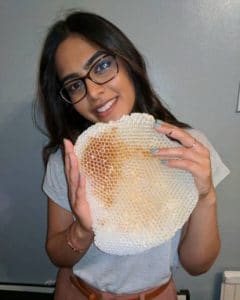 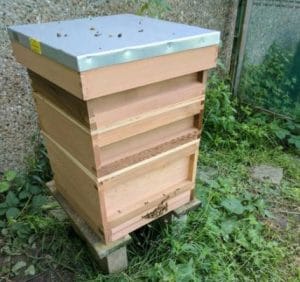 What is the most interesting thing you’ve learn about bees?

Definitely the different roles of bees. In a hive you’ve got the queen bee, all the female worker bees, and then you’ve got drone bees who keep the temperature of the hive neutral by doing a little shimmy. It’s so interesting that the drones are just there to regulate the temperature – without them the worker bees would go crazy. The queen bee will mate only once in her life with her chosen drone bee. The drone bee’s role is to mate with the queen and then die. It’s crazy!

What is the hardest thing you’ve done?

I got stung! I was excited and scared at the same time because there was such a build-up. As soon as we started the course everyone was asking ‘but what if we get stung?’. The course leaders told us we could be allergic. ‘How do you know?’ ‘You get stung!’

We all got comfortable and then two weeks ago my turn came around. I was excited because we’d been talking about it for so long, but it also really hurt and I came out with hives on my arm. I think this makes me a proper beekeeper now.

What was the best moment?

The first time I properly inspected a really busy hive. All the bees were in and out and it was amazing to see everything in action after all the theory. When we transferred the bees into the national hives we had left a frame of honey from the old hive at the top for them to feed on. On this inspection, I saw that the bees had started imitating the old frame and making natural comb, even though there was nothing else really up there. It was so beautiful. I took some of that comb home and I got a feeling that I want to do this forever.

We want to see through the winter. They don’t do much in the winter because there’s hardly any pollen, but we need to check they’re alive while they hibernate. It’d be really nice to see how they’re doing, but it depends on funding. I’m so attached to the hives, I just don’t want to leave them

We’ve also set up an Instagram page to promote awareness of bees and stop them from dying out. It’s a week by week update of everything we’ve been learning on the course so that people can follow our journey.

If you’re interested in joining the course next year, keep an eye on updates from Leaders in Community, and the Greening Brownfield Garden on twitter – @greenbrownfield