A taste of Haiti

Today Richard Macien is hosting his monthly food event ‘Taste of Haiti’ for anyone wanting to try Haitian food or missing Manje Lakay (the taste from home). There are some exciting dishes on the menu, including Richard’s particular favourite Jon Jon Rice – rice cooked in Haitian delicacy black mushrooms. And if this isn’t enough to entice you, there will be FREE RHUM PUNCH if you arrive before 7pm.

Kafe 1788 opened in June 2016. It’s the UK’s first coffee shop to use single origin coffee beans from Haiti. You may be wondering about the name… Richard tells us 1788 was the year when Haiti was considered the ‘Pearl of the West Indies’, when 60% of the world’s consumption of coffee originated from the Caribbean country. As for Kafe, this is the creole word for coffee. 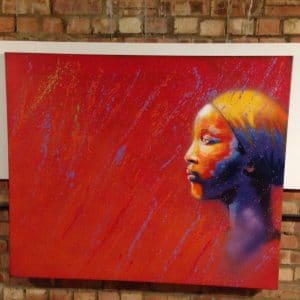 Richard opened Kafe 1788 because he has a passion to share things with people.

The walls display artwork from artists across London – he says people like seeing the diversity of talent and creativity. People are always asking questions about the painting and drawings hung around the cafe and in the larger space, which Richard uses as a gallery and community space.

We asked Richard what it was like opening up a coffee shop in London’s East End. He told us that the reaction has been really positive. Kafe 1788 is one of the only places in Poplar where you can just sit, relax, and enjoy real coffee. Neighbours, who may never talk to each other, come here and have a chat. Coffee brings people together. And we don’t have to go to Shoreditch anymore to enjoy a nice cup of it!

Richard gets a real sense of achievement from bringing communities together. For some reason, he likens the Kafe to Fight Club.

We’re not sure this works, but it says something about the way people seem to stumble upon this hidden gem and feel instantly included in its coffee drinking community.

The big question! For Richard, it wasn’t pie n mash but diversity which drew him to the area. Poplar is home to so many different groups of people and that’s what gives the place its unique identity.